Recently my wife and I stopped at a garage sale on an impulse.  After a quick trip around the clothes and dishes I was heading back to the truck when my wife asked me if I had seen the tools, pointing to a five gallon plastic bucket.  I turned back and looked in to see mostly junk except for a plane tote peeking up from the bottom.  I pulled it out and saw a plane that I was not familiar with; it looked like a Stanley #4, maybe Type 16, except that the blade protruded through the sides to the full width of the plane body.  I wondered what a rabbet plane like this would be for as I asked the price.  Told $1, I bought it despite the fact that it was encrusted with grime and rust.

I took it home and, to my surprise, it cleaned up very readily in only a couple of hours and was without any significant defects: 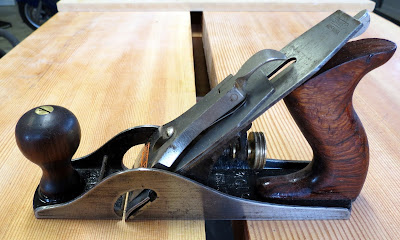 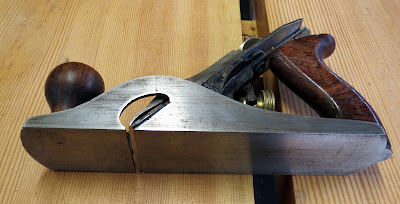 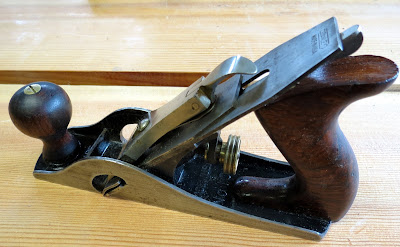 I'm not sure how carriage makers used them but I do know that I am unlikely to make a carriage so I wondered if I would ever use it.  Further research revealed that they are also used for timber frame construction and raising panels, and I can imagine using it for the latter.  Until now, I have used a standard #4 bench plane to raise panels, as taught by Paul Sellers, and have found it quite satisfactory.  I was also interested to learn that Lie Nielsen makes replacement blades for them.  The biggest surprise, however, was that sellers on Ebay are asking $200-$500 for them!  That doesn't mean they're getting that much of course, but it still gives an indication of how highly valued these vintage tools are. This is probably because they were less common to begin with and they are very susceptible to damage due to the inherent weakness of the castings.

Lee Valley and Lie Nielsen make similar planes.  The Lee Valley Bevel Up Jack Rabbet Plane comes with a fence, has knickers on both sides, a tote that tilts to either side and an adjustable mouth.  They also make a Skew Rabbet Plane.  The Lie Nielsen No. 10 1/4 Bench Rabbet Plane has both a tilting knob and tote as well as nickers.  They also make a Low Angle Jack Rabbet Plane.  I am surprised that there is enough demand for planes like this to justify these fine manufacturers making so many versions of this tool.  All of them seem like significant improvements over the historical versions, in particular because of the knickers.  Personally, I think I prefer the Lee Valley Skew Rabbet Plane, which is based on the Stanley #289, but it's hard to say without trying all of them.  This is one more example of the incredible variety of high quality hand woodworking tools that are being manufactured today.  Makes you feel like a kid in a toy store.

As many woodworking blogs as I read, I can't recall ever reading any posts about any of these tools in use.  Here is one that argues the Lee Valley Jack Rabbet is the Swiss Army Knife of planes.  I am not sure that having one plane that will do everything is a high priority though.

I am looking forward to using my vintage 10 1/2.  Perhaps, as I often do, I will find out that this is a tool you don't know you need until you have one.
Posted by Andy at 9:10 AM