I got my older Stanley 5 1/2 some years ago in poor condition.  I rehabbed it to be a user and it has worked very well but there was always an issue that I knew I would have to face someday:  there was substantial pitting on the back of the blade that would end its useful life prematurely and that is what happened last week.

Pre-1939 5 1/2s have an unusual 2 1/4" blade, so it's difficult to find a replacement.  I ordered a replacement blade and chip breaker from Ron Hock but, when it arrived, it wouldn't fit.  Basically, the blade was too thick to fit through the mouth.  When you retracted the frog enough for it to fit, the blade would ride up on the back of the mouth (the frog was positioned behind it).  I called Ron on a Saturday and he called me back promptly.  There is one type that has this problem.  He offered to take the blade and chipbreaker back or to instruct me on filing the back of the mouth to make it fit if I was willing to.  I was hesitant about my ability to do it well but he assured me that it isn't too difficult, so I gave it a shot.  The back of the mouth is vertical and you basically file the top back closer to the angle of the frog.  I did it, it worked, and the plane performs beautifully.

There's a philosophical question about whether you should be modifying a vintage Stanley plane and I understand that some might not want to but I don't know what the alternative is.  I am not aware of a thinner replacement blade in this unusual size.  Lee Valley, for example, doesn't offer them.  I have a Hock blade in my #7 and I like it.  This is a user that I got at a garage sale for $20, rusted and covered with grime.  As far as I understand, my modification wouldn't interfere with using an original blade if I ever found one, which is highly doubtful.  To me, it is better to have a tool that is in excellent working condition as a result of a modest modification than to have an original sitting on the shelf.  Hey, some of my friends have replacement knees and they're still their same old cantankerous selves.  Still original even though they've been modified. 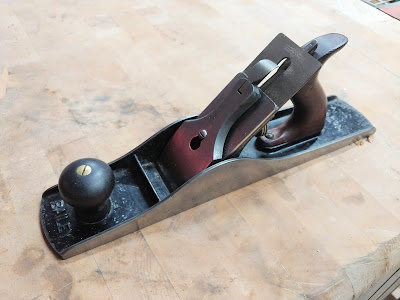 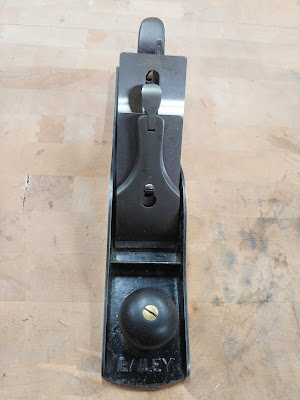